The Aiken Chamber exists to be the catalyst for business growth, the convener for leaders and influencers, and the champion for a stronger community.​

Norman Dunagan has more than two decades of operational and management experience and has developed a sharp eye for how businesses become bloated with inefficient processes and untapped waste streams. These cost firms tens of thousands of unneeded dollars. Dunagan shows businesses how they can retool for a sleeker, smoother and strategically focused plan for reducing waste by implementing recycling programs that redefines waste items as future resources. He founded The Dumpster Depot in 2005 and in 2015 the forward thinking company was named Small Business of the year 2014 by the Chamber of Commerce. As an Entrepreneur Norman has found success by motivating, inspiring and influencing people. He has the unique ability of helping customers envision and achieve their company’s goals of Zero Waste.
His clients have ranged from Industry Giants such as Bridgestone Americas Tire Operations, MTU America as well as local small business - all trying to make a change to less waste.

Jason Rabun received his B.A. from the University of South Carolina in 2006. He joined First Citizens Bank and Trust Company, Inc. in October 2014 and serves as its vice president, business banker. Before First Citizens, he worked as a financial services officer at Security Federal Bank for six years. As a native of Aiken, Rabun has remained actively involved in his home community. He has been a member of the Aiken Chamber Young Professionals since 2008 and served as its chair in 2011. He was recognized in 2009 as Aiken’s Rising Star by the organization. Rabun is the treasurer for the Child Advocacy Center of Aiken County, past chair and board member of the Aiken Technical College Foundation board of trustees, past chair of the Aiken Downtown Development Association and serves on the City of Aiken’s Planning Commission. In addition, Rabun is a volunteer firefighter for the City of Aiken where he was recognized as Volunteer Firefighter of the Year in 2013. Rabun has a passion and is committed to assisting small businesses and customers with their financial matters and enjoys giving back to the community he calls home. He enjoys spending time at Palmetto Golf Club, playing court/real tennis and traveling  with his wife, Carla. 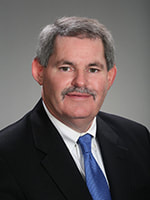 Joe Lewis is a former Aiken Chamber board member and served as chair of the Chamber in 2009. Lewis is the vice president and financial services officer for Security Federal Bank. Lewis is responsible for the oversight of financial and credit services for new and existing community banking clients, and analysis, coordination and completion of commercial lending activities.
Lewis has more than 34 years of commercial and community banking in the Aiken market, including serving as market president for First Community Bank. He earned a bachelor’s degree in administrative management from Clemson University and is a graduate of the South Carolina Bankers School.
Lewis is the vice chair of the Aiken County Commission for Technical and Comprehensive Education, the governing board of Aiken Technical College. He is also a member of the Rotary Club of Aiken, a board member of the Aiken Corporation, and on the endowment committee of St. John’s United Methodist Church.

Van Smith is a born and raised Aikenite and graduate of Aiken High School. Smith started working in the clothing business at the age of 12 with his dad, Lionel Smith, at LeGrande's of Aiken. In 1976, Lionel Smith, ltd was born and he began working part time for his father’s new men’s clothing store. Smith graduated in 1985 from the University of South Carolina with a degree in retail management and became a full-time employee at the store. He purchased the store in 1992.  Smith is a passionate advocate of Downtown Aiken. He has served on multiple Aiken Downtown Development Association boards and committees for over 20 years. He serves on the Aiken Main Street board, the Aiken Corporation board, and is a Paul Harris fellow and a member of the Aiken Rotary Club. Smith and his wife, the former Tracey Olcott, have teenage triplet daughters and are members of St. John's United Methodist Church where he serves on the Finance Committee and the Youth Advisory Committee.

Charlie Hartz is the franchise owner of the three Dunkin’ Donuts located in Aiken County. His newest adventure is the Village Café at Woodside which opened January 2018. Hartz has over 30 years of country club/resort management experience. He has worked for ClubCorp Golf Management, located in Aiken and Debary, Florida; Arnold Palmer Golf Management with locations in Bangkok, Thailand, Los Angeles, California, and Orlando, Florida, and Bennigan’s Restaurant in King of Prussia, Pennsylvania. Hartz served as the Chair of the Aiken Chamber Board of Directors in 2016 and 2017. He is a board member of the Sertoma Club, the Aiken Technical College Foundation, and The Family Y – Aiken Branch, where he serves as the current board chair. In addition, he is a member of the Club Managers Association of America and the United States Parachute Association. Hartz has a B.S. in Marketing and Management from Alfred University, Alfred, New York.

E. Ryan Reynolds  moved to Aiken with his family in the late 1980s. He graduated from South Aiken High School in 1997 and from Clemson University with a B.S. in construction science and management in 2011. Reynolds serves on the Construction Industry Advisory Board for the Construction Science Department at Clemson University. Reynolds began his career building new schools with his family’s Aiken based general contracting business, H.G. Reynolds Company. After traveling across the state of South Carolina as a project superintendent with the family business, he moved back to Aiken in 2013 to take an ownership role in the business. Reynolds and his wife, Kelly, are members at St. John’s United Methodist Church. They have three daughters, Elizabeth Grace,  Anna Bryce, and Evelyn. He coaches youth sports at Citizens Park and volunteers with various other local charities.

David Jameson, a native South Carolinian, is the President/CEO of the Greater Aiken Chamber of Commerce. He has more than 40 successful years of Chamber of Commerce and Economic Development leadership and management in South Carolina and North Carolina. He has led the Aiken Chamber through two 5-Star Accreditations with the U.S. Chamber of Commerce – Only 105 of the nation’s approximately 7,000 chambers nationwide currently hold this distinction.  In November 2014, the Aiken Chamber was named the Outstanding Large Chamber of the Year for South Carolina and North Carolina. He currently serves on several boards, including Aiken Downtown Development Association, the Aiken Corporation, and is both a past chair (2011) and incoming chair for 2018 for the Savannah River Site Community Reuse Organization, a nonprofit organization representing five counties in Georgia and South Carolina that surround the Department of Energy’s Savannah River Site. He is the past-chair of the Greater Aiken Integrated Trails Foundation (GAIT), the Woodwinds Estates Homeowners Association and the Rotary Club of Aiken. In 2017, Jameson was honored with the Distinguished Citizenship Award by the Boy Scouts of America and also was recognized by Concerned Ministers Fellowship with the Stuff that Legends are Made Of Award. He has been recognized as a Notable Alumni of Armstrong State University and is a recipient of the Order of the Palmetto, the highest civilian honor awarded by the Governor of South Carolina.